This page won an award! Click here to read about it!

On January 29th, 2011, Rutgers University campus police barred some 400 Jewish students and their supporters, including some Holocaust survivors, from attending what was billed as an anti-Zionist gathering at the state school. The event, sponsored by pro-Palestinian group BAKA (which stands for Belief, Awareness, Knowledge, and Activism, not that any are practiced) was advertised as “free and open to the public”…that is, until 400 ardent Zionists showed up. Then, suddenly, the suggested donation of $5 became mandatory. In this video, Andrew Getraer tells our side of the story as he explains that the event was advertised as being completely free and open to the public, even though they later claimed all 400 of us owed them $5 for entry.

At one point, a lady tried to tell us that this was OK. However, she failed to acknowledge the fact that it was only the Jews who had to pay, as anyone else was either a member of BAKA or could quickly become one by signing up at their table.

Even if you DID pay the $5, AND you provided the required name and email address, that still wasn’t enough. You also had to show your ID, because…well, I really don’t know. I don’t see any justification for them requiring identification for an event that’s free and open to the public. Some have claimed that no one who paid the money was barred – this is partially true, in that if you both paid the money (that no BAKA member had to pay, since it was free until we got there) and gave them your ID (which they needed because…?), you could get in. The crowd who showed up for the “free and open event”, however, would have none of it.

At no point did anyone in our crowd get violent.


However, there was at least one member of the opposite side that became enraged when he realized he was completely wrong, after quoting the same Facebook advertisement that we were. He grabbed my camera, but fortunately I got it back from the coward.

See this from another angle here, right after he grabbed my camera:

We chanted and chanted, but since the police were called so late in the turmoil, they apparently didn’t know what was going on and decided to follow BAKA’s orders.

We later heard the testimony of a Libyan Jewish refugee, who told us that this kind of anti-Semitic treatment is nothing new.

Faced with this discrimination and hostility, we did what Jews do best – sing and dance and celebrate life, love, and Israel, right in the lobby of the building.

Their Facebook invitation and Craigslist post clearly show that they are “free and open to the public”. Also, I never got any refreshments. 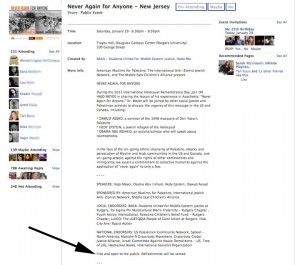 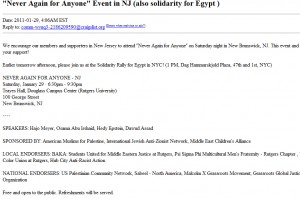 The website of the tour itself also says that $5-$20 is a “suggested donation”. 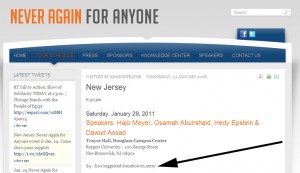