Yet another example of the Targum editing an op-ed…except this time, it was actually a press release from the Rutgers Hillel.

Rutgers Hillel Rabbi Esther Reed
Sunday night, Oct. 6, very realistic “eviction notices” were placed under doors of student residence halls and apartment buildings at the University. They were so realistic, in fact, that many students were, at first, led to believe they were being evicted from their place of residence. The notice, a publicity stunt by Rutgers Students for Justice in Palestine, was distributed to spread propaganda, create confusion and to gain attention.

Respecting students’ rights to privacy and giving them the safe space necessary to be free from solicitation and imposition in their places of residence is not only a hallmark feature of our university but a necessary component to enable and foster the growth of inclusion and diversity within our community.

Making students feel unsafe in their homes is apparently part of the RSJP strategy, which also includes propagating half-truths, misstatements and historical inaccuracies. The fraudulent “eviction notice” is a de-facto example of this reprehensible agenda.

The Rutgers Hillel Center for Israel Engagement was established to foster a positive voice for Israel while defending Israel against slanderous attacks such as this. We decry this manipulation and intimidation of students through stunts employed to promote a political agenda.

We hope our university will work toward making our campuses and students feel safe and free from harassment or intimidation by agenda-driven interest groups — to enable the proper and profound exchange of ideas in a civil and productive manner fostering greater communication and growth for everyone. Rutgers Hillel looks forward to being a positive contributor to such an environment.

Second, they completely modified a paragraph from the press release. The original paragraph stated that participants in the fiasco were board members, although the Targum changed that to simply “members”. How did the Opinions Editor know that no board members were involved? Seems strange, considering they posted all about their personal involvement on Facebook. The original statement said that the notices were placed in “850 student dorm rooms,” and this was changed to “under residence hall doors on all five campuses.” Now, the Hillel didn’t go around counting every single fraudulent eviction notice – we got the number 850 straight from the Facebook post of Amanda Najib (an SJP board member, who goes by Amanda Naj on Facebook): 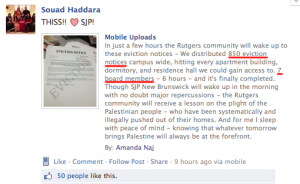 Text: Souad Haddara – Thiss!! SJP! In just a few hours the Rutgers community will make up to these eviction notices – We distributed 850 eviction notices campus wide, hitting every apartment building, dormitory, and residence hall we could gain access to. 7 board members – 6 hours – and it’s finally completed. Though SJP New Brunswick will wake up in the morning with no doubt major repercussions – the Rutgers community will receive a lesson on the plight of the Palestinian people – who have been systematically and illegally pushed out of their homes. And for me I sleep with peace of mind – knowing that whatever tomorrow brings Palestine will always be at the forefront. By: Amanda Naj

The Hillel also did not make the claim that every campus got hit with the notices. We were only aware of College Ave getting the notices, because we received several distressed phone calls from students on College Ave. So, not only has the Targum decided to change our press release and remove verifiable, uncontested information, they also added their own claims about who got the notices. Strange, of course…unless the Opinions Editor is an SJP member and has inside information, as well as a vested interest in the situation.

Finally, they removed the statement that there are “university rules and regulations forbidding them to do so.” Is this not verifiable? Does Rutgers University allow fraudulent eviction and demolition notices to be solicited under the doors of dorm rooms and residence halls? Certainly not…so why did it get removed? In addition, Amanda Naj admits herself that it was against University policy – why else would SJP wake up with “major repercussions”?

The Daily Targum, and specifically their Opinions Editor, Amani Al-Khatahtbeh (she also goes by Amani Alkhat), should not be allowed to make substantial modifications to any op-eds, especially those that are press releases from a Rutgers organization.