Israel should not be attacked to promote Palestinian cause – Aviv Alter

A new school year, and another opinion article modified by the Targum. I have noted where Aviv’s original submission was modified, by showing both her language that wa removed, as well as the language that the Targum injected.

Earlier this week, I was woken in middle of the night by a phone call informing me of the deplorable, yet unsurprising, actions of an anti-Israel student organization on campus. Editorials, letters to the editor, and articles have been published in the past week regarding the mock eviction notices distributed to over 1,000 Rutgers numerous students Sunday evening in their dorms and on-campus apartments. These fraudulent solicitations were used to frighten and intimidate students with the intention of invoking sympathy based on false and deliberately deceptive information. Rather than discuss the numerous university violations committed by this student organization, I would rather provide my fellow Rutgers students with an honest understanding of the true situation facing both Israelis and Palestinians.

To begin, both the eviction notice and a letter recently published in the Targum refer to the Palestinian refugee situation in Israel, but how did it originate?
In 1947 the United Nations established the Partition Plan for Palestine which divided modern day Israel into two nations- one Jewish, one Arab. The Jews welcomed this plan due to their desire to re-establish a Jewish state after being in the land for over 3000 years. The Arabs, on the other hand, rejected the UN’s plan to establish a Palestinian an Israeli state. Once again- the local Arabs REFUSED to officially form Palestine two states. The following year, Israel declared its independence and was home to over 160,000 Arabs who accepted Israel and shared equal rights and citizenship as the Jews. However, a majority of Arabs living in the region refused to recognize and accept the establishment of Israel and, along with Egypt, Iraq, Jordan, Lebanon and Syria, went to war with Israel. Surrounding the time of the war, an estimated 500,000 Arabs who refused to recognize Israel fled to neighboring Arab countries who, with the exception of Jordan, denied citizenship to their Palestinian comrades. Many of these individuals and their descendants today are the Palestinian “refugees” that have been referred to in the past week.

As Sir Alexander Galloway, the former United Nations Relief Works Agency for Palestinian Refugees director in Jordan, explained, “The Arab States nations do not want to solve the refugee problem. They want to keep it as an open sore, as an affront to the United Nations and as a weapon against Israel. Arab leaders don’t give a damn whether the refugees live or die.” Additionally, the UNRWA applies unique criteria to the Palestinians that are not experienced by any other refugee in the world. For example, only Palestinian “refugees” refugees maintain their status as refugees after they have gained citizenship from any recognized nation.
Moreover, the descendants of only Palestinian refugees are automatically granted refugee status.
For the rest of the world, this is not how it works.
The consequences of these double standards result in skewed and untruthful “facts” of the true situation in Israel.

Additionally, Israel has also been the only nation in the world to offer land on which to create a Palestinian state. However, the repeated refusal of Palestinians to accept Israel’s offers has resulted in heightened tension and a murkier vision of real peace. The situation in the Middle East is not ideal, and I am sure that you did not need me to tell you that.

However, we cannot allow our dissatisfaction with the current state of affairs lead to fabricated, dishonest statements being spread as was earlier this week. As a proud pro-Israel and pro-peace Rutgers student, I recognize that truthful, open dialogue and discussion is the most powerful and meaningful form of communication. 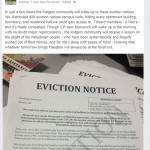 Let’s review the changes. The first change switches “1,000 Rutgers students” for “numerous students”. Amanda Naj (she’s credited as Amanda Najib in the Daily Targum) posted that she and her fellow Students for Justice in Palestine officers gave their letters to 850 apartments. Given that more than one student lives in an apartment, they reached far more than 1,000 students. They changed the description to ‘numerous’, which is vague and doesn’t show the sheer lengths to which the SJP went to give out the fraudulent eviction forms. The next change is the addition of the term “on campus” – strange, how did the Targum know that the SJP only gave notices out to on-campus apartments? It’s almost like the opinions editor is a member…

The next two changes are interesting because they completely change the focus. Palestinians rejected the British Partition Plan, which would have established two states. On the basis of never wanting there to be a Jewish state re-established, they rejected having their own state entirely.

They then switch the term “Arab states” to “Arab nations”…within a quote from Sir Alexander Galloway. That just doesn’t make sense, it’s an easily verifiable fact – here’s just a few examples. Aviv got the quote right.

The next change is the removal of quotation marks around the word ‘refugees’ – however, the point made in that sentence is that these people should not, in fact, be refugees.

An entire sentence is then removed – “Moreover, the descendants of only Palestinian refugees are automatically granted refugee status.” This is a verifiable fact – here’s a link to the UN’s website.

“Palestine Refugees, and descendants of Palestine refugee males, including legally adopted children, are eligible to register for UNRWA services”