I have a lot of clients share files with me, and after the job is done, I tend to remove them from my Google Drive to keep it organized. I recently ran into a file that I couldn’t remove – the option was grayed out:

Seemingly impossible to delete, the “Remove” option with the trash can next to it is grayed out. Clicking it does nothing. Similarly, when the same file was shared with a Google Workspace (formerly G Suite) account, I saw a “Move to Trash” instead of a “Remove” option, but it too was grayed out: 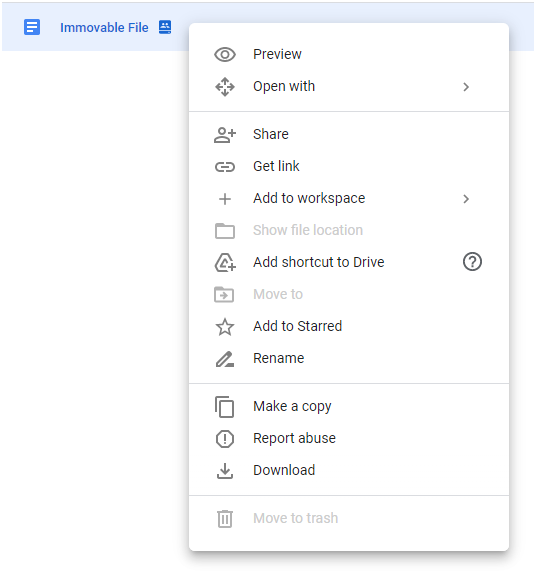 The issue appears to be that this file is not just any shared file. A normal shared file is created by a user in their My Drive section, then shared. If instead a user were to create a Shared Drive, then create a file within that shared drive and share only the file with you (and not the Shared Drive itself), that file will show up for you pretty much like a normal file, with two differences. The first difference is that to the right of the file name, you can see a small Shared Drives icon, indicating that the file resides in a Shared Drive (whether you have access to it or not). The second difference is the one described by this article: you can’t right-click and hit Remove or Move to Trash for some reason.

For reference, after a number of frustrating searches, I found this answer on StackExchange. It’s not the accepted answer, which says to right click the file and click “Remove”, which didn’t work for me, as evidenced in the video above. Instead, this deceptively simple 4th answer by an anonymous user who never answered anything again just “Just drag it physically to bin file.” I can’t believe I didn’t try that, but in fairness, the perfectly good right-click menu option with the trash can was grayed out, so I assumed it was impossible. Another option I tried from a different answer was to edit the sharing options and remove myself as a collaborator, but that didn’t remove it from my Google Drive either.

Two important notes – although it looks like you’re deleting the file, and Google doesn’t provide its standard message that other users with whom the file is shared can still see it, in my experiments the original user still has their file just fine and receives no notifications that you’ve deleted it on your end. Second, when deleting files, normally there’s an “Undo” option for a few seconds after the file is deleted, and furthermore after that the file is in the Trash folder and can be restored. I tried to hit the Undo button, but it did not bring the file back, and it never appeared in my trash bin. Only delete the file if you’re sure you want it gone!

I’m trying to right click and drag the file to trash from google docs and it won’t drag. I’m trying to delete files “not owned by me” with the “remove” and “trash” grayed out.
Thank you
Laura

THanks bro a lot this worked .

OMG, you save me a lot

welll ill be damned . thanks dude

Seriously, I can’t believe this is the solution. Thanks so much, Jake!

Wow!! Thank you so much. I searched for many hours on how to fix this and this was the answer. I appreciate you helping out the world lol frfr

OMG, thank you!!!
I literally spent last hour trying to figure out why I cannot remove shared file.

I have literally been trying to figure out how to remove this file for months. Thank you so much!

Did not wrok for me 🙁

You saved me Jake. I guess even if it’s from google it’s still mere humans with their buggy softwares 🙂

Hi Jake – this worked for many of the files I couldn’t delete otherwise in my “recent” folder. But some didn’t delete. They were moved to the trash and it said “file moved to trash” but the file stayed put and there was nothing in the trash folder. Any thoughts? In a bind here.

thanks buddy , I had plenty of files in my google drive , I was thinking of giving up google drive because of this issue and now drag in to bin idea works like a charm

Thank a lot. Great article. Everything is very clear and understandable for me.

THIS WAS SO HELPFUL. Thank you so much.

Your tip saved my day! You’re a true hero!

Wow! This worked for me. Thanks for suggesting it.

Thanks a bunch! I’ve been looking for this answer for a couple of years on and off, and have just come across your suggestion. It seemed too good to be true, but it worked for me. Legend!

My admin blocked my from doing this I can’t delete previous grades things that I don’t need do you know how to fix this?

Thank you! That was a stumper!

OMG! Thank you so much! I tried everything to remove two old shared docs and looked at numerous suggestions. This is the only thing that worked. It was driving me crazy. Thank you for saving my sanity!

Thank you so much!

It was this easy? I spent the last hour looking up solutions and nothing seemed to work, thank you so much!

THANK YOU SO MUCH

BRILLIANT! I went down the same rabbit hole sequence and the solution is so simple/obvious. Duh! 🙂

Trash at top is aso faded out for me.

Fantastic!I’ve been looking for this solution for a long time. There are a lot of solutions, but they only work for docs shared with specific users. Thanks for sharing this.

LIFE SAVER!!!! I had 3 rando files in my shared folder for over a year! THANK YOU SO MUCH!!!

So simple that I never thought of it. Totally deleted a file I’ve been trying to get rid of since 2019. Seriously! Thank you

Hi, I’m having this problem too. The thing is, I don’t see a trash can in Google Docs. Is that another setting? I’m on a Mac, don’t know if that makes a difference.